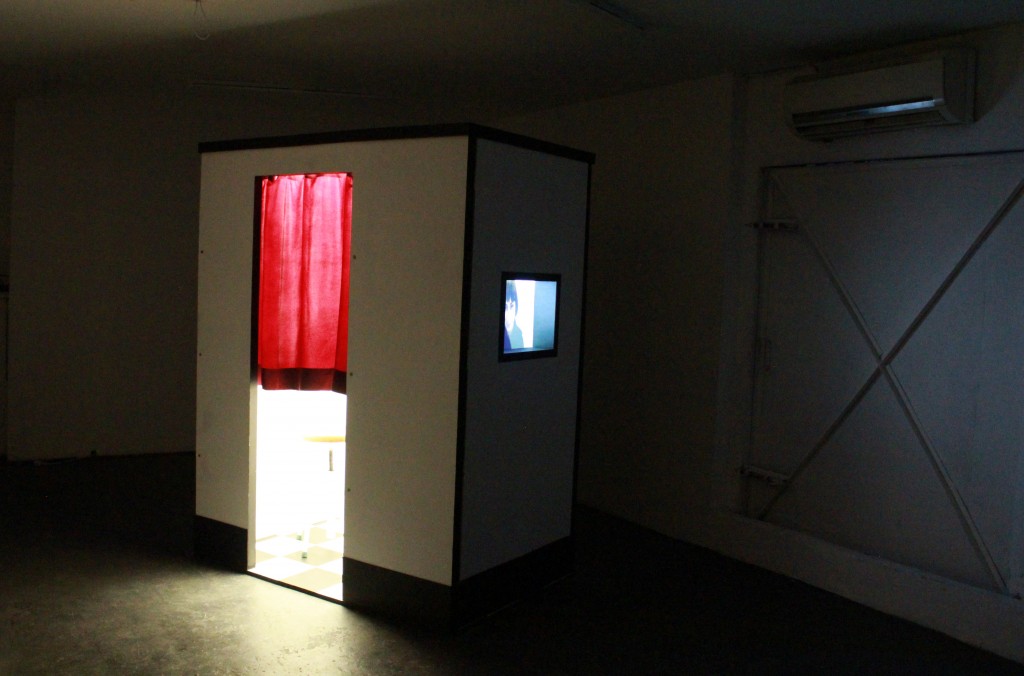 «Iliyana Kancheva: Image Don’t Cost a Thing. Iliyana Kancheva hails from Bulgary. Her work deals with guessing old fashion games as in Snow White tale, where Maleficent repeatedly guesses to her magic mirror. She brings back these games to an analogic stage.» (from the Jury’s decission)

Imagery is everywhere. We are creating an iconosphere loaded with images. When sharing our own image we approve every single detail. In this manner we are constructing the desired icon of ourselves and creating a secure reality, where the self is protected. “Image Don’t Cost a Thing” is a generator of “bad pictures”, through which I challenge the viewer’s expectations of his image. The machine would act erratically and would take pictures spontaneously.
Thus substituting the expected image by which the participant desires to be perceived

The installation is a replica of the photo booth. It consists of 7 demountable panels, a chair and a curtain. Inside there is a computer with a custom software, two monitors, a smartphone for taking pictures and using it’s hot spot function for creating a local network and LED lighting.
More and more society is driven by dreams of an error-free world, of 100 % efficiency, accuracy and predictability in technology as well as in human behavior. My works explore the vanishing niche of the imperfect, the error, the bug as an outcast category , but also as an invariable feature of the human nature. Through photography, video and installations I capture or sometimes intentionally evoke situations which try to disturb the established routine of man and reach to his body, space and self-awareness.

Bio
Born in 1987, Iliyana Kancheva lives and works in Sofia. In 2010 graduated of Stage Design(BA) and in 2014 graduated of Digital Arts(MA) in National Academy of Art in Sofia. Works in the field of theatre as well as experimenting with photography, video and installation. In 2015 is selected for International Digital Art Fest in Sofia. In 2013-2015 her experimental films are selected for various video art festivals in Bulgaria, Serbia, Belgium. At Naoussa Film Festival 2013, Greece Iliyana is awarded with “People’s Choice SEE Talents Experimental Award” for the film “Autofocus”