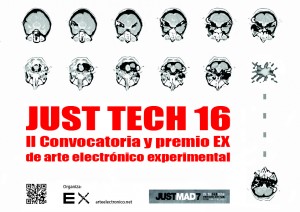 The Jury for the II Open Call for EX Experimental New Media Art Prize announce their verdict as follows:

The Jury, consisting of Nilo Casares, Jaime Lavagne and Arturo Moya Villén, in order to pass judgement on the II EX Experimental New Media Art Prize, held a meeting at five p.m. on the 19th of January 2016 and, after a long deliberation, decided to

the First EX Experimental New Media Art Prize, worth a thousand euros, to the piece BNC B by Martin Reiche (Germany), both for its artistic quality and for an extraordinary synaesthesia that offers the video-work’s visual experience as a journey into the inner depths and wiring on which every digital work depends –to the extent that they would not exist without such wiring– and for displaying a digital transparency that only works within this art dare to showcase, allowing us to see what they are made of, yet not how they have been implemented.

This Award seeks to highlight individual pieces as much as it strives to scrutinise digital art’s current state, never neglecting expository coherence in doing so. Thus, with the aim of keeping in harmony all selected works, we would now like to select the following works to be shown at Just Tech 16 (New Media’s section of JustMAD7):

The Mailman’s Bag by PolakVanBekkkum (Netherlands), which we consider to be a humorous intersection of sound art, smartphone-induced GPS frenzy, and a great glitch atmosphere that surrounds us, from this reality infuriated by the presence of an error which we can’t avoid because all around us there is only noise.

Jane by Ian Filtman (England), because it dives into an emotional chaos “à la carte”, which invades us with confusion using games as rogue and mischievous as those employed by Joyce in his play ‘Exiles’, this time with a theatrical execution, and a transparent panoply which does not inherently allow a clear following of love’s (and heartbreak’s) happenstances.

Environment Dress by María Castellanos and Alberto Valverde (Spain), for its development in the ways to connect things to individuals and their clothing, following an impending course of internet of things, a course that threatens to link everyone and everything to the Intervention and Control Technologies into which the ICTs that we all cherish have evolved.

We hereby hope to make this public for better knowledge of those concerned.